Our call time was originally set for 9 AM but was pushed an hour because we went late the night before. So Paul and I were driving down the 5 on our way to the shoot, tired but ready to keep going.

We have three different locations today: the recording studio, the executive office, and the house party location.

I only had two things to shoot at the studio: the guys at the booth, hearing their music, making changes, like it, etc. The other was a performance of them in the booth. By the time, Paul and I arrived, G&E had already been loading in and most of the crew were already there. So, I took Paul through the mixer board set and he set the guys to work.

Meanwhile, in a rehearsal studio downstairs, we started building the booth set. The guys were performing to the camera in this one, not as a part of the narrative, so I wanted to really focus in on the shot. For the booth set, we took three 8x3 panels and set them up so that there was a back, and the sides were extending out lengthwise. With the camera only shooting from mid chest up, we wouldn't see the floor, but we could be very deep and have the guys moving around a lot. We used the actual soundproofing eggshells (do not know the technical term) and lit it from above so the light is just raking down this thing, as you can see below: 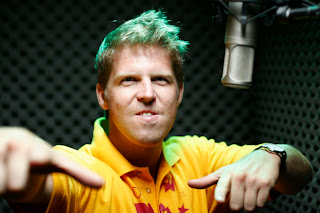 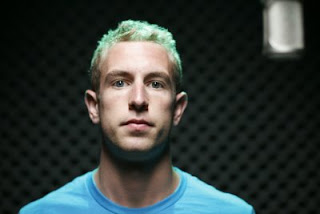 We threw a studio mic in there popping down from above, shot it hand held, a little wild, and just had the guys rock to it.

Once we shot the guys in the booth, we were out of the studio location and on to our Record Exec office location. As you may remember from this post, we had some trouble finding a office to shoot in, but in the end, Luke secured a space on the 17th floor of a high rise on City Dr. in Orange. However, I hadn't seen the location, so I didn't really know what we were looking at.

We arrived ahead of most of the crew so I took a look around. Luke had gotten us the conference room but as Paul and I were looking at it, our minds started turning. Gretchen, the extremely nice woman who was our "guardian" at this location helped us look around for office supplies when she showed us this office: 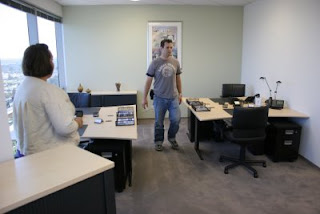 Suddenly, Paul and I started thinking. This was clearly the better office, and if we pulled all those desks out and set up one, it would look awesome. I have to say that the office location was the scariest to me, simply because we didn't have a lot at our disposal to dress it. Quddus, a good friend of mine, was kind enough to let me borrow his gold and platinum record plaques, and we had one more from a prop house. But, after convincing Gretchen to let us shoot in this space, clear out the desks, and start dressing it, I felt a lot better about it, and we turned it into this: 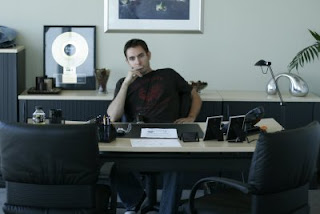 It looks way better in the shot but you get the idea. This was also our first day with the steadicam. Erwin, our steadi operator, was a great guy and did fantastic work. The office shots were a series of push ins and pull outs. Pretty simple stuff but effective none the less. However, we started shooting a little late and had a lunch break, and it was my understanding that we had a hard out at 5, a time we were never going to make. Apparently, Gretchen had a prior engagement she had to attend. We were pressed for time and a little worried about it, but then we found out that Gretchen would be able to stay and we could shoot until we needed it. I don't think we went too much over, but a hard out means equipment, everything needs to be out, and that would have been tough.

I have to say though, on these little shoots, when everything is scheduled to the second, and you have very little time to do everything, lunch kills me. You just get a momentum going and then you have to break. I understand it's importance but I again realized on this shoot how quickly I like to move when we're not shooting I'm tapping my foot waiting to. Which is terrible. The crew needs to eat and they deserve it. I just like to be rolling camera as much as possible.

One of the big questions for me, leading up to this shoot, was who would be playing the Record Exec. I had no idea. At one point, I thought maybe Quddus would do it...but he'd be playing himself, not a no name record exec and he'd be lending his name to the project as a result. However, I did always see it as this nerdy guy, the kind of person you would never expect to be listening to, or even like, the White and Crazy Kids. I always thought that would be funnier.

So, then, I put up a link on Craigslist. I knew that we didn't have the budget to pay anyone and would hope that we could find somebody to just do it for free, for the exposure and the footage. In the end, a dude named Mark, (who isn't even really an actor, just a med student who use to act), submitted to us looking to audition. I didn't really have time for that and he looked the part so I said you're in and forwarded the info to our producer.

Then, Friday came along and Dan showed me an email he got from Mark, which said something like, "After checking out this group online I'm not going to do this for free. These guys look like a couple of trust fund babies and if they want me to do it they can get their mommies and daddies to poney up $1000."

Now, I'm sorry, but this is a ridiculous email. Mark, if you didn't want to do it, just politely decline. Did you really think that we would pay you $1000 for this? He's not even an actor. We didn't even pay our featured girls that much. I don't see any point in asking for that, other than to say "stick it" but I don't know why he would. We weren't trying to cheat him, we couldn't pay him, no, but so what? Anyway, that guy, Mark is a total tool. That email was totally uncalled for, totally unprofessional and just not cool. End rant.

So, we needed someone. Fortunately, Luke and Randall are good friends with a cool dude named Joe Taormina, who happens to have a ridiculous mustache, looks older than he is, and is perfect for the role: 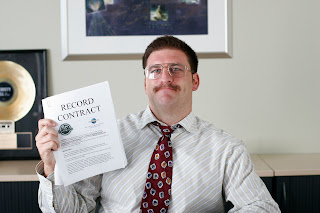 And he's perfect. He was there everyday, he let us blow smoke in his face, danced with girls, was a really good sport about it. But the 'stache, man, that and the glasses MADE it.

After the office, we packed up and moved over to our party house location. We had a lot to shoot, including a performance scene in the backyard, full of background, and then a bunch of narrative shots inside the house, including a walk in, and random stuff going down.

We were there with plenty of time before sunset, so we started setting up in the backyard. While Paul was lighting the set, I was getting Luke and Randall on getting people over. They had put out calls on Facebook and stuff and people started trickling in. We had maybe only 18 at one point. So, we went ahead and shot what we needed for the performance in the backyard:

Now, since we weren't paying for these extras, the only way Luke and Randall could get them there was to throw and actual party. Ironically, after the scene in which we really needed people, most of them showed up, for the scenes where we needed less. It was late by the time we started moving into the house and it was getting harder and harder to control the background and Luke and Randall.

It was a lot crazier than this video shows but you get the idea. I mean, background would do their crosses and then we've have to run over and pull them back. Finally, I got what I needed inside and moved onto the outside garage area for the walk in.

I have to say that I really like this scene was full of compromises on my part. We just had no time, no control and it was a nightmare. There was a lot I didn't get that I wanted to, if only to make it more specific and highlight certain points, but I think I might have a solution for that.

It's really crazy how things get moving and how very little time you have to get what you needed. You find yourself really making compromises, which will always happen, but you need to be in the mindset of finding creative solutions, not getting lost in not knowing what to do or how to change it. You really have to think on your feet. I constantly think about how I can or will be editing it, which helps a lot because I know, if I get into a crunch, those basic things that I absolutely need to make it work for me.

We wrapped around 1AM. While the party raged on, we packed up and Paul and I headed back up to LA. While most of the crew had a day off on Sunday, Paul and I would be running around shooting a few little pick ups. Rather than bore you with that, I'll move onto the last and final day for the next post.
Posted by Unknown at 8:00 AM