The Post-Shooting Blues and Some Updates 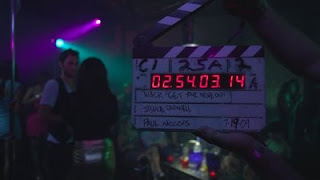 I love production. It's my favorite part about the filmmaking process. I love being on set, I love the process that goes into creating an image on film, I love working with a group of collaborates, I love being the boss, the pressure, the stress, I love that everyone is looking to me for answer and I love being prepared enough to give it to them. I love how the production process brings together a large amount of people from diverse backgrounds, with a variety of specialties and talents, to create this one lasting piece of art.

The longest production I've worked on as a director, outside of the ASB films I did in high school, was five days. Almost everything else I've done, with a sizable crew, was 2-3 days. But, even with such a sort amount of time, I almost always find myself suffering from the post-shooting blues. I haven't spoken to other people about it, but I wouldn't be surprised if this is a common occurence. When you spend every waking hour with a group of people, even if you've never met them prior to this, and even though it's only for four days, there's a certain bond, a certain team mentality that is established, as all of you work towards a common goal. And then, it's all over, and everyone goes their separate ways.

And it's a weird feeling, coming down from that high that is production, and then suddenly, all these people you've been around are gone. And, at least for me, I get into a little funk, a little bit of depression, but I suppose it's perfectly natural. Anyway, that's part of the reason I didn't post Friday. Just wasn't in the mood, I guess.

But, after decompressing last week, I finally got my sh*t together and started work on the video.

First though, I ran into a little snag. I completely forgot that I need an Intel-based Mac system to edit RED footage. My laptop is Intel, but the tower I normally edit on isn't. So, now I'm like, great. I'm going to have to edit this whole thing on my laptop...which would suck. Especially because at the time, I was looking to ingest the RED footage via Pro Res 422, which is editable but uses a huge amount of processing power, so much so that I wasn't sure if my computer would handle it. Plus, I started ingesting the footage via RED's Final Cut Pro Codec and it was taking forever.

So, I started looking around for an Intel Mac that I could rent. I spoke to James, my post guy, who will be doing the color correction on the footage, and we came up with a plan. I would edit the low-rez proxies the RED camera generates, and he would then re-link the media in color to the original high-rez R3D file, which he would then export at full 4k resolution.

At the same time, a friend of mine came through and told me he's got an Intel Mac tower sitting around and I could borrow it if I wanted. Yes! So clutch.

With everything coming together, I spent Sunday ingesting the clips, organizing my bins, and synching all the peformances with the music, and syching the sound with the clips for the first scene. Got that all done Sunday. The footage looks great, even though I'm editing low-rez clips. It's weird though because it's the first time I'm editing not that great quality footage but using it simply as a placeholder. Prior to this, what I saw was what I would get, this time, the final product will look so much better than what I'm looking at for the next two weeks.

In other news, Travis and I are starting our newest script tonight. We've spent the last couple weeks going over the story and carding it out. And now, it's been sitting there for two weeks waiting for me to finish shooting the video. Now that I'm done, Travis and I are ready to start. Once we finish the first draft of this script, we're gonna move right into our next script (hopefully) which is a feature I'm developing as a my first feature film. I hope to be shooting it next year.

Meanwhile, I'll be editing the White and Crazy Kids video for the next 3 weeks and then moving into producing the video for Trapt, which we'll be finalizing next week. At some point, I'll also be putting together Chapter 3 of Mateo's mixtape.

All in all, I've got a super busy month ahead, with a lot of new projects on the way, so there'll tons of new blogs with a lot of good stuff.
Posted by Unknown at 8:00 AM