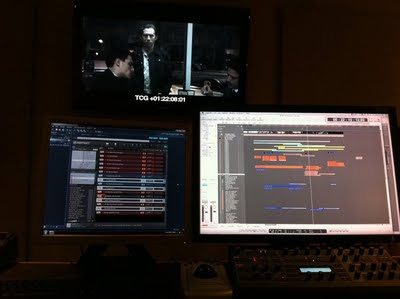 I have to admit that after working with Bill on Dark Prophecy and since I started writing Dig back in July this was one of the things I've been looking forward to the most: the great Bill Brown has started work on the score for Dig.
The pictures above and below are from Bill's session today with Steve Tavaglione, a woodwind musician whose playing you might recognize from Shawshank Redemption, The Road to Perdition, American Beauty and others.
Bill is a frequent collaborator of Steve's and brought him on board for Dig. I'll be hearing Bill's themes in the next day or two as we start the last couple weeks of Dig post-production.
As more happens I'll be sure to update you. 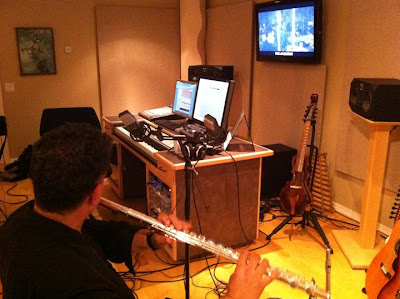 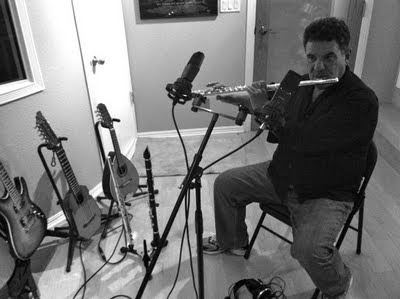 As part of our continuing 3Questions series, I present Julian Rosenberg, Talent/Lit Manager at Caliber Media Company, representing actors, writers and directors, and developing scripts for film and television.

HBAD: How did you get your start?

JR: I got my start up in Vancouver where I'm from. It's a big service town, and after high school I started working on the movies and TV shows that were filming up there. I thought I wanted to be an actor, so I did commercials and a ton of extra work. I enjoyed being on set, decided I wanted to produce, and was able to get a grant to attend film school. While in school I had a couple of commercials and short films I produced win festivals, and the day I finished school I bought a car and drove to LA. This was September 2005. I started in LA as an intern at a management company, then did 2 years at UTA as an agent trainee, and then became a talent manager in 2008. By 2009 my focus had shifted towards wanting to work with writers, so I came to Caliber to learn the Lit game. That was August 2009, and the rest is history.

HBAD: What are the most difficult challenges you've encountered on your career path?

JR: The economic turndown, and the industry labor disputes have been the biggest challenges. Both of those happened the year I was promoted, and the business has rapidly shifted since then. The next biggest thing is the "challenging personalities" you face in this business every day. Everyone has an ego, and navigating the politics of that can be tricky. But if you're thick skinned and just do the work – you'll do fine. You just can't take things to personally.

HBAD: What advice would you have for someone just starting out in this business, looking to break into representation?

JR: You have to be an entrepreneur. Gone are the days of just putting in your 3-5 years and being promoted. There was a really interesting article in the LA Times this year around Christmas, about how it's harder and harder to get promoted, and lots of incredibly talented and experienced executives are fighting it out for very few positions. It's much harder to just go Intern – Assistant - Jr Exec – Exec, the way it used to be for years. Nowadays a lot of companies are making their assistants be profitable before even promoting them, whereas you used to be able to get promoted in order to eventually become profitable. Long story short, if you want to break into this business, you need to bring something to the table. Oh, and nepotism as always remains king in Hollywood.
Posted by Unknown at 3:43 PM No comments:

Sensible Digital Cinema: The Cooke 5/i Primes from Inspiration Studios on Vimeo.

Above is a rather humorous look at the new Cooke 5/i prime lenses from Inspiration Studios. Thanks to NoFilmSchool.com for bringing this to my attention.
Posted by Unknown at 5:00 AM No comments: