We were unable to secure a club location for Sunday so we ended up pushing our shoot to Monday, which, in the end, worked out for the best. We could only have the club from 8AM - 8PM. We didn't finish shooting until about 1AM on Saturday night. We would have been forced to push our call time which would have given us less time at the club, time I really needed to get everything I could. So, everyone had a day off.

I spent some time Sunday revisiting my shot list and setups to make sure we'd be moving as efficiently as possible. I didn't want to not be able to get something that I knew I would need. I actually put a schedule together with Paul and that only took us to 3PM. Everything after that would be dream shots. However, I also knew that we'd be pushing things as we went along since everything takes time. We had a nice buffer, we would be in one location for the whole shoot, and I really felt good going in to Monday.

On Sunday, we also secured our two featured girls. We really wanted some really attractive women to be hanging out with our guys. Dan had a connection to two women, AJ Almasi and Amy Sue Cooper. (Warning: websites may be NSFW. Amy was, as I just discovered while writing this post, a Playboy model).

Everything was coming together. We also had a small logistical issue to figure out. We needed a generator to power our lights and had one but it was a big truck. Dan was worried about finding a place to park it. We knew the club had a back area but weren't sure if we'd have access to it and wouldn't know till the next morning.

We had crew call at 7:30. I wanted to make sure everyone was there at 8 when the doors would open and we'd be able to load in. As soon as those doors opened we were in there and began setting up. I knew it would take an hour or so to get everything up and running and also knew we had time. 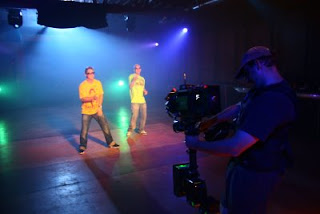 Our first setup of the day was the main club performance of W&CK. No one else was in the shot and we were essentially using the club as a sound stage. We wouldn't see anything but the guys and lights. We got our first shot off at about 10:30. Also, on Sunday, I had worked out that aside from a few shots at the end of the day, we'd be parking the camera on Steadicam for the whole day, which certainly made things easier.

After this shot, we maintained the same lighting but moved into our b-roll dancing shots. See people move in the club, seeing Luke and Randall dancing, their walk in to the club, models dancing etc. A lot of similar stuff. Which was quick.

We did have a lunch break right in the middle of this, which in the end, worked out great because our models were running a little late. I needed them for two three set ups 1) dancing in the setup we already had 2) the VIP section setup and 3) getting them approaching the guys at the bar.

The only sad part about this whole thing was that we lost our DP Paul halfway through the day. He had to fly back to NY because he had a job starting at 6:00 AM Tuesday morning. Because flying back takes essentially 8 hrs (about five for the flight, plus 3 for the time change) it just eats up the day. He had to leave at 1:20 just to arrive in NY at 12:30 AM. However, Paul had a good friend of his out here, Arturo Meyerhoff, to come in and finish up the job. I have to say that Art did a great job. He moved quickly, he was on, he knew what I wanted, and it was a very seamless transition. 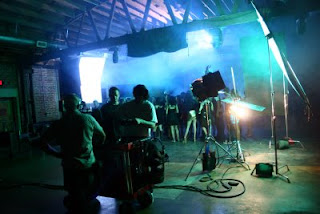 After the girls arrived and got ready, we shot their dancing and then moved onto the VIP setup. The VIP setup was going to be a performance scene for the guys. I wanted them to be in a roped off section of the club, with the girls, rapping to the camera, people around them, etc.

We set up two leather couches off to the side of the location and did all the set dressing. You can get a sense of what we did in the photo below: 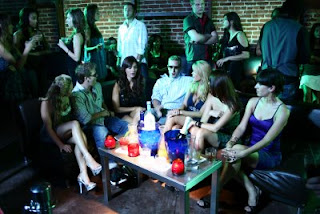 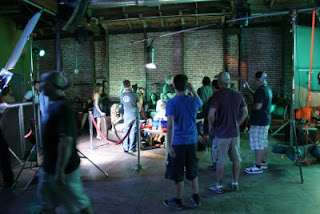 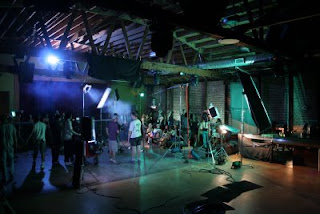 We spent some time shooting our VIP performances. It looked really great on camera. We had our steadicam moving in and out of the area, pushing past the ropes, just, really good stuff. I was very pleased.

After the VIP section, we moved onto the bar. At this point, we were at about 4:00 PM and I had four more major setups to get. Two of them I had to move quickly on because they involved the girls and we were paying them by the hour. This is where we started to run into a problem.

I had two more definite setups with the guys, one of them involved the girls and extras and the other involved extras but no girls. We lost the extras at 6:30 PM. I spoke with Trent our AD and we decided it would be best to shoot the bar scene. I didn't have a lot to get, just two shots. I wanted to get the girls walking up to Luke and Randall at the bar. And I wanted to just get a nice steadicam move around the guys at the bar. From there, we needed to move onto the leading walk in shot, which was looking the opposite direction we had been looking all night.

I was able to have most of our G&E prelighting every setup so when we were ready to shoot we were just walking into the lit area and rolling the camera, which helped move things along. 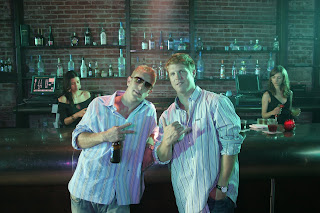 We knocked off the bar shots and then moved into the last big setup of the night, which was leading walk in (camera was in front of the guys) to mirror the follow walk in (camera was in back) we shot earlier. Once we had the extras set up I literally had 4 minutes to shoot the scene. We did it as a series, no cuts, and I believe we managed to get 3-4 takes in before we called it.

After all of that, I shot a few insert shots at the bar of cocktails being poured, etc, which I didn't love, but, whatever. I can use 'em.

And then it was all over. We wrapped production the White and Crazy Kids music video for their first single "Get Your Drink On."