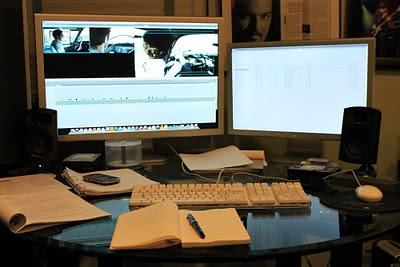 I'm sure you're asking "How can I read about post-production on Dig when I haven't read anything about production?" I promise I'll be writing my production blogs soon but in the mean time I have started edited and for the next couple months you'll have to listen to my insane editing ramblings as I go through this process and share with you what it's like.
Point: I should be editing right now. I'm in the middle of it, the screen's in front of me, and instead I'm typing away. I never really feel like I can write blog posts and yet here I am. Why? It's distracting me from editing.
Okay, so, tonight is officially the first day of editing on Dig. I should be ecstatic right? We shot the film a month and a half ago and I'm just now editing? I must be itching to put this thing together. And I am.
But like any new editing project, I feel like I'm starting over. Like I've never edited a film before. I'm bouncing around, looking at clips, starting to edit scenes and then moving on to something else. Being very ADD about the whole thing. It's a part of my process and I know that but it doesn't make it any easier to deal with my fumbling around like an idiot.
Still, I haven't seen this footage for a month and a half and a part of making this film not suck is shedding the skin I built up as a director and coming back onto this project with fresh eyes, where nothing is sacred, where I see only what was shot, not what I wish I shot.
Having not watched any of this footage for a while I need to reacquaint myself with it, watch thing, find those bits that are interesting and then slowly start to built the film, shot by shot, scene by scene.
A particularly challenging thing about Dig is the enormous about of footage we shot and that pretty much every take was shot with two cameras. So, it's a lot to go through. And rarely is the action a series of "building shots." What I mean by that, is that the action takes place in one area, and I shot the shit out of that one area, so during any give line, I have 10 options, five of which are from angle A and the other five from angle B. For any given moment in the film, there are just a lot of options and it takes time to look through it all and decide which is the best one.
I'll probably be doing this all week, slowly starting scenes, abandoning them, going on to another, trying to find my groove. Once I do, I'll be off and running.
Meanwhile, I'll continue my floundering tonight.
Needless to say, the footage looks great.
Posted by Unknown at 5:00 AM