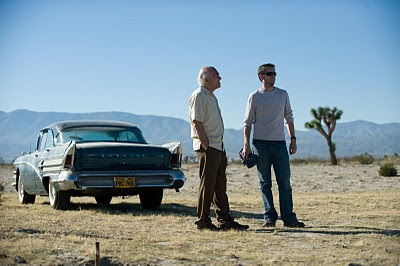 This month's American Cinematographer has a great article on Biutiful, the new film from Alejandro Gonzalez Inarritu (which I have not yet seen) and there's sidebar called "Inarritu on Method." In it, he talks about shooting on location vs. shooting on a stage, saying:
"I don't know if I'm a masochist, but I hate sound stages, and not only because I think they will never represent reality correctly. There's something about the texture, the reality of walls, the smell, the story of them, the vibe. Even if the builder creates sets exactly the same, the sets don't have soul. I think reality can never be matched in that sense. The other reason I shoot all my films on location is that there's something uncomfortable about locations that, in a way, helps everybody feel they are in real territory and not making a film. I like that, and I think it's a very psychological environment."
Other than when I was a camera op on Dark Prophecy, where we shot on the CSI:NY stages at CBS Radford, I've never directed a project that was shot on a stage. Everything I've ever done has been on location. As I've grown as a director and as a storyteller, and come to understand the types of stories I want to tell and the types of films I want to make (especially aesthetically), I've come to really enjoy and prefer shooting on location for the reasons Inarritu listed above.
There's something harder about it, something more challenging that, I believe, embeds itself in the film you're making. Not that shooting something on a stage is easy, but you can move walls, you can change lighting, you can shoot night during the day and day during the night, and so on. There's just something "comfortable" about it and I've learned that I don't like to be "comfortable" while shooting a movie. I want to be challenged, I want to problem solve, I want to have to work around walls and schedule and daylight (even on a film like Dig, where short days fucked us), I think it makes the film better. As many directors have said, most recently Scorsese, "If making a film was easy, it probably isn't very good." There's something about having "gone through it" that embeds itself in the film. (The work of Werner Herzog comes to mind.)
There's also something undeniably real about what you're seeing and that's because it is real. The dust is real, the light is real, the writings on the wall, it has a soul. Personally, I like the challenge of dealing with the issues of shooting a movie in addition to the terrible difficulty making the movie itself.
As you can see from the pictures below, shot on location in the desert of Palmdale during the production of Dig, we were out there, facing nothing but dust and sun. It was a huge challenge, especially shooting during winter where we had maybe 10 hours of daylight, but I loved every minute of it. It was an adventure. 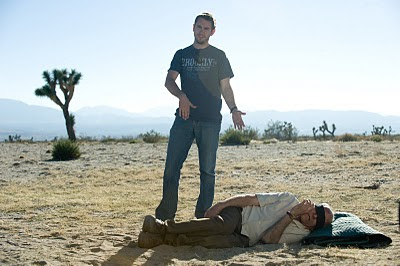 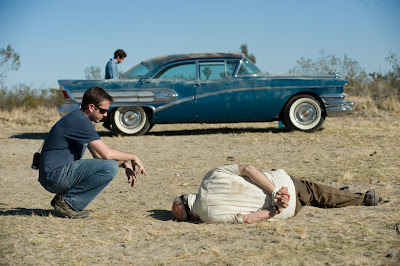 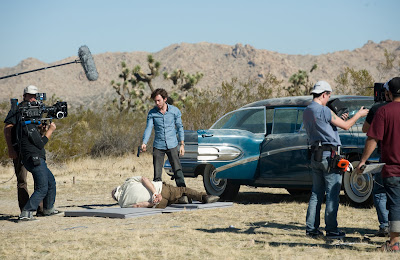 What do you think about location shooting vs. shooting on a stage?
Posted by Unknown at 5:00 AM