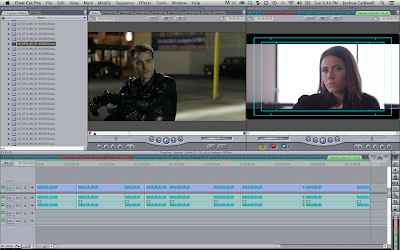 An interesting fact for anyone who wants to upload it to the Layover page on IMDbPro.com, this is the first film I've directed where I wasn't also the editor. It's been a long time coming. I've often said that the reason I've never worked with an editor before is that I haven't found one as good as me who also works for my price: free. That is, until now. The time has come (thankfully) to promote from within and Will Torbett, a longtime assistant editor of mine, got the job.

As happy as I'm sure he was, little did he know the world of pain he would be soon entering. That said, he sucked it up like a man, doubled down on his French language and set to work. And last Monday he delivered the first assembly of Layover in to my waiting hands.

As I sat down to watch I was reminded of the text from an LA Times Roundtable I read a few years back. Several nominated directors were sharing their experiences and they came to the topic of an assembly cut:

Tom Hooper: I think it's an extraordinary thing when you watch your first assembly [of the roughly edited movie], the film always has become something slightly different from what you thought…


Aronofsky: The worst day of my life, every time.

LATimes: In what way?

Aronofsky: When you watch an assemblage, you just know you're getting drunk that night. It's just a miserable experience. Because you realize you have so much work [to do on it].

Lisa Cholodenko: And you have no idea if it'll ever be there.

Coen: It's always funny because we cut our own movies and I feel exactly the same way.

I always try to remind myself of this as I'm working on projects, that it's really no different an experience for me than it is for the best directors working in the business. It's a tough thing to watch because you're not watching the version in the movie that you've had in your head this whole time...or even the version you think you shot. You're looking at A version and that's it.

Now, I was really expecting the worse (not because of anything having to do with Will, this feeling isn't because of the editor) but at the end of the day, I saw a lot of potential in it. It was really nice to have been able to step away from that assembly process where I probably would have been maddeningly pulling my hair out. Especially because the way we shot this just did not allow for a lot of careful consideration of each shot. We really just locked and loaded and got what we got.

The other thing I've kept in mind is that I've noticed, as I myself have gone through assembly and editing my own films, is that they are a puzzle. Despite all the coverage  for some reason, there's only 1-3 ways my films can be cut together. They're really meant to be seen as a puzzle in the editing stage and it's about finding the right cut, the right take, the right piece of music to make it all come together. So, it's just about getting to that point.

Besides all the mistakes I made as a director, all the cuts that aren't quite there, the scenes that appear to be a disaster, what I saw in there was a pretty good overall story, a journey, a character arc (I think...it was all in French without subtitles, so I could be making this up). I saw something really interesting and I saw a lot of stuff to work with. Now it's time to do just that.

I'm thankful to have found a partner at this stage of the game.

We've managed to generate a lot of interest in our little film, from managers, agents, producers, actors, sales agents and more in the last couple weeks, based on nothing more than a four minute showreel I cut together (which I will not debut publicly since it's pretty much the plot of the film in four minutes). Now we just want to make sure we live up to those expectations. I think we can get there.

In the meantime, here are a few of the first official images from Layover. Let me know what you think of the stills!