While Paul started lighting the main CSI:NY set for our bomb squad scene (which intercuts with the interrogation room scene we shot on Monday) we flipped the lights on in the autopsy room and shot two quick plates of the television for the final scene just before Dark walks out.

In addition to the main scenes we had to shoot, the bulk of which was the bomb squad scene, we had a few pick ups from the day before, include the rest of the black ops hospital scene (Labyrinth’s angles only) as well as a shot of Labyrinth in his costume from the fight scene calling out to and taunting Dark.

But first, we had the bomb squad scene. As mentioned above, this is the second component to the first bridge. We couldn’t have higher production values than on this scene. Not only were we shooting on the main CSI:NY set where the lab, video room, Gary Sinise’s office and more is located but since it’s a bomb squad scene we went all out. Our amazing costume designer, Amanda Riley, went out and found the same bomb suit that was used in The Hurt Locker.

We had three awesome actors playing the bomb squad officers: Voltaire Sterling, whom I worked with on Dig; Garret Davis, who played one of the pilots of the doomed FedEx plane in Cast Away; and finally, Andres Perez-Molina, who came into play Cruz, the technician in the suit. If there was a scene in which we had some amazing production value, this was it. And the bomb suit looked fucking amazing. I couldn’t be happier with the result.

While shooting one of the close-ups as he’s opening the box, I watched as this bead of sweat rolls down Andres’ nose. So amazing! 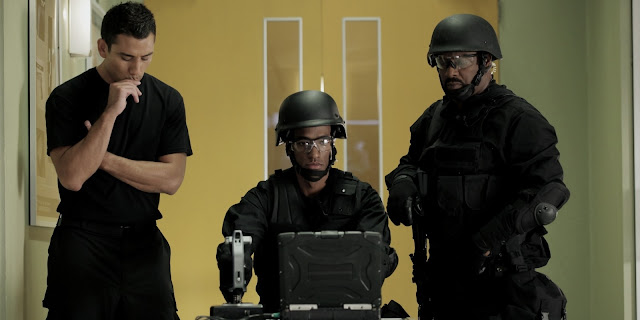 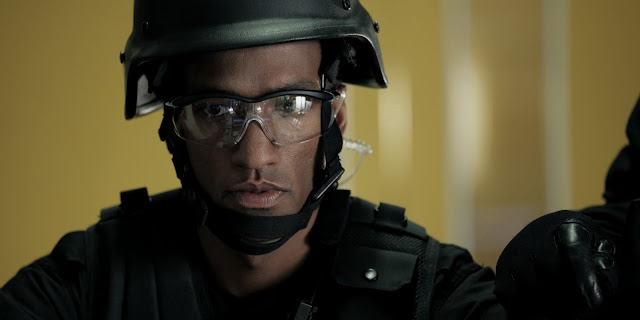 It took us a while to get some of these shots off however. We had to move the character from one end of the hallway to the other, one of the angles was on a dolly, moving through a room and it was a big space to light. This got us into lunch.

After lunch we moved into one of the offices to shoot Labyrinth’s side of the Charles Murtha scene. Contrasting with the dirty, grimy feel of the basement, we decided Labyrinth’s angle should be warm, elegant as he talks with Charles from his office in New York. I hope the contrast will play up well.


This included a few pick-ups on some lines of dialogue; insert shots (in which my hands doubled for Dark’s), and some intro and outro shots of the scene. Despite the lower page count for today it still took us a while to get everything shot since we had five separate scenes/settings to go through.

In addition to that, this was our final day on the stages before moving on to Malibu, so we had to get everything loaded up onto the trucks and wrap out the stages.