Advice to Filmmakers: Be Interesting

Last weekend, while at a private party in Malibu, I had the chance to talk to probably the biggest TV Lit agent in Hollywood. It was a casual atmosphere, surrounded by family and friends. I got to tell him a little bit about myself, the MTV Movie Award, Dig and so on but then I mentioned that I had spent a lot of time up in the Malibu canyons on my motorcycle. "Oh, you ride?" he asked. I nodded. "So, you're interesting," he said, at which point we proceeded to talk about motorcycles.
And if you're wondering, I didn't lie. This is me: 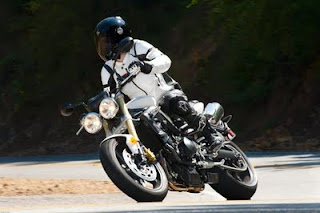 I've always had an interest in things besides filmmaking. As mentioned above, I ride a motorcycle, rock climb, mountain bike, hike, camp, shoot guns (I own an H&K P2000 9mm), I've traveled the world, I devour books (lately, a lot of non-fiction, totally unrelated to Hollywood in any way, my current reads are a book on string theory and one on hacking), and cook. Those are some of my interests at present. To be honest, the last movie I saw in the theater was Bridesmaids and lately, if I'm watching TV, I'm watching Friday Night Lights on Netflix.
So much of my day revolves around the industry, whether in my day job at Dare to Pass, or at night writing my own scripts or working on projects in development, that when I have free time, the last thing I want to do is have anything to do with the industry. Plus, I find that these outside interests fuel my passion for storytelling because I'm always learning something new and inspiring.
The point is, with regard to the lit agent, is that he too spends most of his day dealing with Hollywood and my guess is (since I can't speak for him) that when he has time off, he'd like to talk about anything else.
As a filmmaker, I believe it is important to have outside interests, not only for your own sanity, but for those of others. There is a view point that one has to live and breathe film, but I don't find that all that valid. I think if you want to succeed in this industry you have to be totally committed to doing what you can to make it and spend as much time as possible writing, directing, script supervising, whatever it is you're in pursuit of. But in the meantime, explore those other interests.
Because I'll tell you this, while the agent thought the MTV Movie Award was cool and asked to see Dig it wasn't until I told him about my motorcycle that I became "interesting." Everyone in this town has a script, a short film, or an idea. Stand out from the crowd because you have more to talk about than Hollywood. Everyone will appreciate you and remember you for it.
Posted by Unknown at 5:00 AM