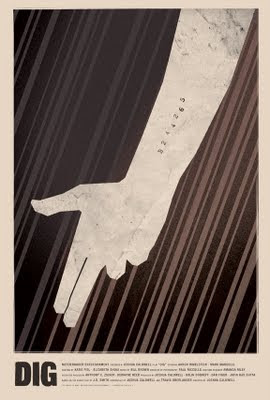 I'm super excited to show you guys the official poster for Dig today. This has been in the works for a long time, even before we shot the film. I'm a huge fan of the recent practice of creating graphical posters for existing films. Having seen a few here and there I thought it would be awesome for us to do something in that vein. Eventually, Travis got in touch with graphic artist Brandon Schaefer. If you're unfamiliar with his work you should definitely check it out.
We initially spoke to him back in October and after we sent him a copy of the script he agreed to do the poster. We checked in with him off and on after filming and into the edit and finally sent him a rough cut of the film. Brandon was all for it after seeing the film and Brandon, Travis and I spoke at length about images from the film that came to mind, deeper thoughts on the film, posters of his that we loved. What really appealed to me about his work were posters that were amazing in their own right but took on new meaning if you've seen the film.
Also, I'm a huge fan of the design work on book covers from the 60s (we featured a copy of "Beyond Good and Evil" from the time period that has a great look) and because Dig takes place in that time period we felt it appropriate to play with that as well.
We gave Brandon these collections of thoughts and inspiration and let him go to work and what you see above is pretty much exactly what he delivered. And now we're revealing it to you.
I'm getting very excited as we get closer and closer to completing the film and can't wait to have people see the film.
Leave your thoughts on the poster below!
Posted by Unknown at 5:00 AM