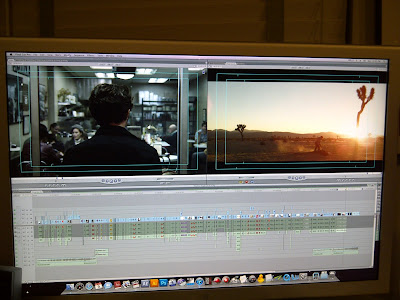 Wednesday night, I complete the first assemblage of Dig. It clocked in at 24 minutes without credits. Obviously, it's long and that's even after I cut an entire scene. Normally, I would have kept it in for the purposes of the rough cut, but I was having trouble getting it to cut together and, having looked at the scene in the script, realized a couple things: 1) there was nothing of any importance in the scene that wasn't covered later on 2) it was almost entirely exposition 3) it was the only legitimately cloudy scene in the film and 4) the film was too long already.
Since the last time I posted, my friend has taken a run at editing the opening sequence and while it wasn't perfect (considering he's an Avid guy who has never used FCP before, I think he did a pretty good job) it was able to shock me out of all the bullshit that comes with directing and allowed me to see the film in a new way. Like I mentioned before, we had a breakthrough and when I got the film back Monday night I started in on finishing it up.
I haven't watch the film straight through yet. Haven't spent the last week getting the rough cut in shape, I wanted to take a break from it, so I could come back to it on Monday and see it for fresh eyes.
It'll probably be terrible (ha ha) but the elements are there. I have full movie from beginning to end and I can now begin the best part of the process, which is taking that rough clay and shaping it into a finished product. It's looking great, the cinematography by Paul Niccolls is amazing as always, the performances are fantastic and now it's up to me, as the editor (and director) to shape into greatness.
Posted by Unknown at 5:00 AM