Author's Note: I meant to write this post prior to shooting the film but didn't get a chance to. Since it involves prepping for the film, I've decided to include it as part of the Pre-Production Diary.
Every little thing in your movie has the ability to tell a story, whether it's something known by the audience or not. Either way, you can use this notion to help guide you in your decision making process as a director.
Typically most young directors don't think about this since they're too concerned with just trying to get the film shot (I'll gladly throw my early self into this category) but as I've matured as I director I've found myself thinking more and more about the importance of using of every tool available to me as a filmmaker. Because Dig had very few props and a fairly stripped down mise-en-scene it was a perfect opportunity for me to really think about how each little element in the film could tell a story in its own right. A clear example of this is the gun used by David. 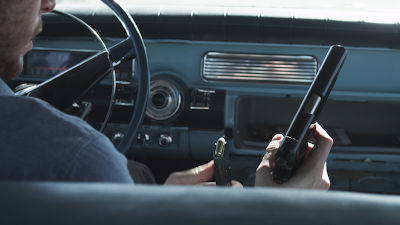 Though it might have been more time period appropriate for David to use a revolver I never wanted him to. In my head, I always saw him using a semi-auto. For one, I wouldn't have to deal with seeing bullets in the chamber and two I found it better, aesthetically, for the film. I personally preferred a semi-auto to a revolver.
Most directors would have done with this and never again thought twice but I found it important to justify why he was using a particular type of handgun. It couldn't just be any semi-auto. It had to be appropriate to the time period (no H&K USP's in this shoot) and it had to make as to how this kid would get a hold of this type of handgun.
Early on, in the script phase, I wrote the gun as a "Colt .45 M1911 semi-automatic pistol." While doing my prep work with the script I started thinking of how that gun found it's way into David's hands. One thing I did know was that officers and even soldiers from WWII almost always kept relics, be it Rugers, Nazi Helmets, their own boots, clothes, and even their army issued weapons, which for officers and even some servicement, included a Colt. 45 1911. So, the story I came up with, and the one I shared with Aaron prior to filming, was this:
Following the Holocaust, David found his way to relatives of his family living in America. In the 1920s, members of David's family, most likely an older brother, left Poland to go to America. There, he met a woman and together they had a son. This son (David's father's nephew) grew up in America and like most men of his age, served in WWII, and was issued a Colt .45 1911 which, following the war, he kept. After living with his relatives for a number of years, probably up to 15 by now, he no doubt saw his relative take out the gun, clean it, oil it and put it away. While David never, ever thought he would need this information, when it came time for him to get a gun, he knew where to look.
None of this is ever mentioned in the film and you would never know it had I not told you but it helped guide us in figuring out exactly which gun we were going to use for production. (While I did write this type of gun in the script, it was more of a placeholder anyway, since I knew that actual, final gun, would come from discussions with our prop master/armorer and the weapon rental house.)
The rope, pocket knife, blindfold and even the shovel were all born of this story as well. More than likely, not being a pro, David would have looked where for all these things? His relatives' garage. So, the note to our props department was, each element should be something that could have been found in a 1960s garage.
Heinrich's clothes, specifically, also fell under this notion. Because Heinrich lived the last 20 years of his life in Argentina, we needed clothes that looked like he purchased them down there, in the 60s (no Gaps!). Even though it mentioned once, we're still telling a story with the clothes he's wearing.
Clearly, I was dealing with a slightly different beast, since this is a period film and everything had to look it. You can get away with a lot more in present day films but that doesn't mean you should think any less about the elements you're using. Props, when used right, can provide powerful insights into your characters and story and as a director you should take the time to really think about what each element of your film is saying to the audience, whether consciously or sub-consciously.
Posted by Unknown at 5:00 AM