No, that's not a still frame from the shoot (we're still 3 1/2 weeks away) but it is the (hopeful) one of two locations of the film. A lot has changed since I last did an update. I've been so busy that I haven't really had time to sit down and write it all out but I finally found a free moment, as I've been meaning to bring you up to speed on the film.
Perhaps one of the biggest pieces of news is that we locked our two leads for the film!Obviously, I haven't revealed what the film is about yet but will soon. However, I'm happy to report that both Mark Margolis and Aaron Himelstein will be playing the lead roles in the film.

You may recognize Mark. He's a very well-known actor whose been in Breaking Bad, The Wrestler, Pi and much, much more. Funny enough, when we were just starting to think about casting for Dig I randomly decided to watch The Thomas Crown Affair. And about half through, up pops Mark as Heinrich Knutzhorn, the jailed German forger. Hearing do the accent (our character is German and also, coincidentally, named Heinrich) and seeing his look made me think this could be the guy. And here we are, a month later, and Mark has graciously accepted the role of Heinrich in our little short film. 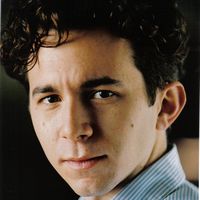 About two years ago, when I was working at production company, Aaron along with several friends, came in to develop a television show. We shook hands, said hello, but since I was fairly low rung I never participated much and only saw Aaron in passing. Around that same, however, my wife and I were going through a pretty severe House addiction and were watching marathons of the show. Aaron was in an episode called "The Socratic Method." I thought it was fun to see him on the show, since I had met the guy, but was also very impressed with the range and depth his displayed. When it came time to cast the character of David, I remember Aaron, we approached him and he very graciously accepted the role. Also a veteran actor, Aaron can be seen as Young Austin Powers in Austin Powers in Goldmember, he had a reoccurring role on Joan of Arcadia, and was most recently in The Informers and Assassination3 of a High School President.
In other big news we have begin filling out crew positions: Orlin Dobreff, VP of Anthony Zuiker's production company has come on board as a producer. Paul Niccolls will be the director of photography. And John Goodwin, Emmy award-winning make up artist for CSI: has come on board to handle all of our make up needs.
We received word today that our film has been accepted by SAG under the Short Film Agreement, a huge sigh of relief. Not that we doubted it would happen but it's a nice thing to have locked down. One of my biggest worries heading into this was the cast and yet here we are. That's one of the main things we're solid on.
The next biggest things we're dealing with is locking down our locations, both the sites themselves and the permits. One of the most frustrating parts of this project is the cost of permits in Los Angeles. The coffeeshop location is in West Hollywood. It is one of the few, if only places that looks like its from the 1960s and closes on the weekend, which means we don't have to pay them to close down their business. Plus, they're not charging us to use the location. I mean, it's a ridiculous deal. Only problem is: it's in West Hollywood.
To get a permit in West Hollywood, you have to pay a $1250 application/permit fee. This is regardless of whether or not you're shooting on private property. Then, if you're planning to use public land, such as a sidewalk, for say, lights or a genny, you're required to pay $770 PER DAY. ($650 or so if you're in a residential area.)
To get a permit in Los Angeles, it costs about $650 plus a fee to the fire department so they can look over your production and make sure there are no fire threats.
This city is so unfriendly to non-studio filmmakers that it's surprising any movies get shot here at all. BUT, what's the alternative? I can't be in a situation where we're filming and somebody calls or the police drive by and we don't have a permit. That is a great loss than the $4000 I'm spending to get said permits. It's literally 1/5 or 1/6 of our budget, location fees alone.
We've got the coffeeshop location squared away. Just need to get a location agreement signed and apply for the permits. We're still working on the desert location. While up in Palmdale scouting I came across a perfect plot of land (see picture at the top of this post). After looking into it, I found the land to be (unfortunately) privately owned, which isn't a big deal, except I had to track down the owners to get their permission. Thanks to the Tax Accessor, I was able to find out who owned it but since they don't record phone numbers (which seems strange) I only had an address. On Saturday, Travis and I went up there to track down the owner. When we saw the house, with what looked to be boarded up windows and a For Sale sign on the front lawn, I started freaking out because, of course, how do you find these people if no one is here. We decided to knock anyway and fortunately, the wife half of the owners, came to the window. We discussed our plan with her, she took our forms and said she'd speak to her husband, but it seemed like everything would work out. As of this writing (Sunday night) we're still waiting to hear back.
The next biggest To Do on my list is nail down a Costume Designer. Since it's period, we really need someone who knows what they're doing, has relationships with costume rental houses and can help us make this look amazing.
This next week is a big week for us. We're about 3 1/2 weeks out and we're going to be locking up a lot of stuff (flights, rentals, crew, picture cars, etc) and I will hopefully feel better about this whole thing by the end of the week. I'm feeling a bit stressed right now because it feels very close to production and I don't feel like we have a lot locked down. I don't know. This is why I'm not the best producer, it stresses me out too much. I'd much rather be focusing prepping as a director, not the nuts and bolts of directing.
Big check offs this week: production insurance, permits, Palmdale location, costume designer, lens rentals, RED camera rentals.
Posted by Unknown at 5:00 AM