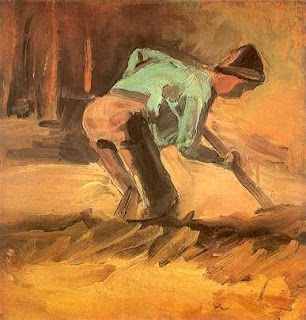 Finally got some time to sit down and write out some thoughts on the latest project. Picking up where we last left off: following the holiday break Travis and I sat down and went through my draft of Dig.
There were a few issues. We both knew the ending didn't work. It was a holdover from a previous version of the script that I really wanted to try but it just didn't work. Even though I knew there was a chance it wasn't right, I decided to try it anyway because hell, it's just words on a page, it's easy to change, and who knows? No harm, no foul, right?
Travis felt the opening scene was really, really solid, something that I certainly felt good about. It was the section I was most confident in. But we also both knew that middle would have to be adjusted. There's some good stuff in there but it needs to be structured a little different, we need to tweak one of the characters and the interaction needs to be adjusted (it's vague, I know).
After our analysis, Travis actually suggested that we sit down and each write separate 2nd drafts. We'd then see what parts work best and combine them. Thinking this was an interesting way of going about it (as you know, I'm all for interesting ways to write a script) I agreed. After all, it's a 16 page script, not a feature.
So, we spent he rest of the week writing our separate drafts. Travis, lacking the commitments of a wife and puppy, managed to finish his draft by Saturday. I needed until Monday night.
I actually spend a good amount of time last Thursday working on the opening scene. Though everyone agreed that it was very solid, I knew there was a conversation that would need to be expanded for shooting purposes, and I couldn't get myself to move on from the scene without trying to do so.
The scene features a philosophical discussion about Nietzsche (I know, I know but it's meant to play in the background of the action and it actually pertains to the theme of the short so bugger off). I don't know a whole lot about Nietzsche (I mostly slept through philosophy class in college but, honestly, I blame the teacher) and because of that, writing this two page scene required quite a bit of research. But in the process of doing so, I discovered a lot of really great things that not only confirmed Nietzsche as the correct choice for this discussion (I had originally chosen him because of one specific quote) but also gave me so much more ammo to play with in how what our characters are talking about, relates to the overall theme, the overall message, of the short.
Sometimes you can get too lost in the research (as Tarantino reportedly did, early on, with Inglourious Basterds) and for a very short time, I did. The research should support the writing but it's not a replacement for it. What you'll find in your research is not drama and drama is what we're writing.
I rewrote the rest of the script on Monday and, that night, Travis and I exchanged drafts, which we in turn, each read on Tuesday.
Tuesday night, we got together, went through both drafts, talked about what we liked, what we didn't like, new ideas that came out of each version.
And now, Travis will be going through the two versions and combining them into a Super 3rd Draft, which will then become the single document we'll work off of from now on. It was an interesting way to get there but the point is we got there.
We'll give this draft to our manager for the weekend, get his notes next week, do another pass, then give it out to a few close readers to get their reaction and then go from there. Depending on the solidity of the draft following our managers notes, we may be at a point to begin pre-production.
We'll need to start breaking down the script, come up with a budget, scout locations and start approaching talent.
My goal is to shoot this in October or November. If it doesn't happen then, I may have to wait until spring because, while Los Angeles is the land of sunshine, our winters haven't been that great recently. Plus, the majority of the script takes place near sundown and, well, we'd like to have as much sun as possible.
So, we'll see where we stand next week.
Posted by Unknown at 5:00 AM