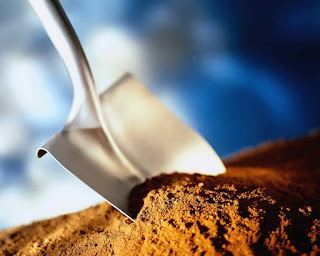 I'm going to keep up with this shovel theme until I run out of a pictures...or until, ideally, I have production photos from the Dig shoot. Either way...
Wow, what a week it's been. I went from researching Dig to having a sixteen page 1st Draft of the short in my hands on Saturday night. It seems...quite fast, in retrospect, while at the time it felt a little like agony trying to get through that first pass.
I had the opening down cold, wrote the shit out of it. What stymied me for a while was what happened after that. I always knew where I was going with it but wasn't sure how to get there. In the end, having gotten to a comfortable place as a writer, I knew that I just had to get something down, let it flow and that the piece would become more polished and get to the level I wanted it once I started rewriting.
And I already know it is. Both Travis and the manager have read it, and where we've discussed taking it is to a really amazing place. So I'm very confident in our ability to get his script where it needs to be and that is only increased by the fact that Travis is now coming into the fold. We thought it best that I get a first draft done on my own, since I've been living with this idea for so long but now that I've done it, I'm wanting to get him on it as early as possible. Already, through early talks about the 1st draft Monday night, we've come up with some great ideas.
The next step for us, following the holiday, is to roll up are sleeves and start digging into this script. Travis is going to be writing out some thoughts, ideas and impressions he gets from the draft and then we'll discuss and find a way to implement them. What's nice is that we have a structure to it. We have a beginning, middle and end and it's all about taking out the chunks that don't work and replace them with what does.
The most daunting task for me, as a writer, is getting through that first draft. I've written about this a number of times before but I can't stress it enough: writing is rewriting. Maybe you're the type who can nail it on the first draft, or one who agonizes over every line until it's perfect before moving on. I think, as a writer just starting on their path, that is a dangerous way of thinking. Rarely, if ever, are scripts not rewritten. As Hemingway said, "The first draft of anything is shit." And thinking too hard about every line is, perhaps, even more dangerous, because it puts you in the position of never finishing the script or it taking forever.
Blast through it! I did. And I'll keep you updated as we progress on the script and the project.
Posted by Unknown at 5:00 AM