Shooting with the Canon 5D

[Author's Note: I was neither the director nor the director of photography on this project. As an employee of Dare to Pass, I've had the fortunate opportunity to have Anthony E. Zuiker as my boss and be a part of the Dark Prophecy project since the beginning. In addition to currently serving as the editor, I was also able to operate the second camera on 95% of the shoot as well as play a part in bringing the production to fruition.
That said, what is laid out below is my impression of working with the Canon 5D, both its ups and downs (though there were relatively few downs) and how it impacted what was a very packed production schedule. Enjoy!] 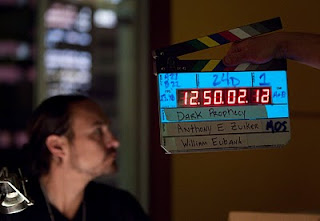 Last week, I was fortunate to be a part of the production of the cyber-bridges for Anthony Zuiker's new Digi-novel Dark Prophecy. (If you are totally and utterly confused by the second half of that sentence, I'll explain in a second.) Basically, I've been fortunate to be part of the project since it's inception a few months ago, serving as an assistant to Anthony Zuiker and Matt Weinberg. In addition to seeing this project grow from a one line idea into what it is now, has been an incredibly beneficial and educational experience. But I'm not here to talk about that. I'm here to talk about what it's like to shoot an ambitious short over the course of six days on the Canon 5D cameras. 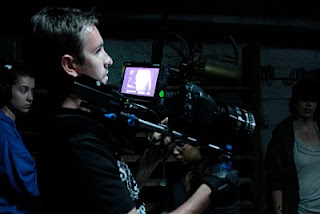 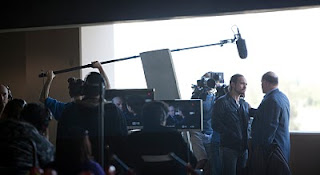 We decided that this would have to be more than us holding the stock cameras. Alan Gordon Enterprises provided us with a pretty decent handheld rig that included 7" Marshall on-board monitors, Red Rock Eyespy shoulder rigs with follow focus, and HDMI splitters going out to HDMI monitors. You can see several pictures of the rig below. 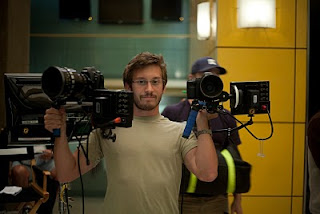 Dan Figur, Assistant Camera, holding the two rigs. The
one on the right has a cine 50mm, the one on the
left has a cine 100mm. 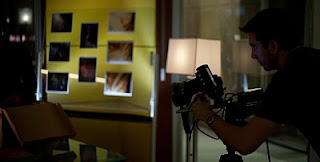 The one scene where the camera was on sticks. 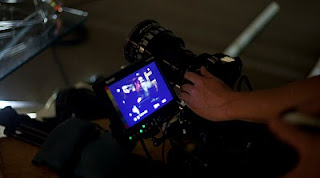 Ultimately, this camera was the perfect solution for this project. I do not believe that the Canon 5D is a RED-killer. Like all of these cameras, they are merely tools towards serving your needs as a filmmaker. Shooting a no-budget that takes place mostly at night? The Canon 5D might be perfect. Shooting a budgeted short that (you hope) will be shown in theatres? The RED MX might be a better choice. Shooting a Hollywood film for 100 million? Probably shooting on 35mm.
All of them will look good. And ultimately, this is all for us, the filmmakers. The audience could care less. Because it doesn't matter what you're shooting on, it matters what story you're telling and how well you tell it.
Be sure to check out Dark Prophecy: A Level 26 Thriller Featuring Steve Dark available on October 14th, 2010. In the meantime, check out Level26.com and stay tuned for more on the editing process as well as a trailer and photos.
Posted by Unknown at 5:00 AM