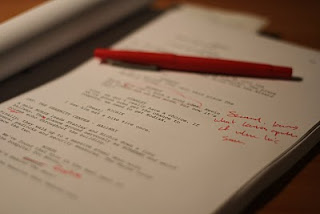 I'm sitting here, in my office, editing the latest draft of our script, prepping to do one more pass on it before we send it off to the producers. (Yes, that's a photo of the script above, courtesy of the new 7D and a 50mm lens set to f/1.8.) This draft has been a long time coming (we submitted our second draft on February 5, to give you an idea) but some major changes and restructuring occurred and a month of the last two and a half was consumed by us returning to the outline stage, so that we might better work some of these issues out with wasting time writing a draft that might have to significantly change anyway. I know that we're always rewriting but these were things better worked out with note cards and a bullet point outline, rather than fleshed out scenes. It would have only prolonged the process. And this is something that happens. Sometimes it takes time to really crack the story, while trying to maintain the vision and ideas of several different parties. Nonetheless, I'm ready to hand it in.
It's been fun but there comes a point when you're ready to get eyes on it and let it evolve. Ready to gather the notes from someone else (since you can't really objectively think about it anymore) and take this thing to the next level.
I'm also ready, creatively, to tackle something else. We probably would have started something already but we don't have the time. Since the new year, I've started working for a big-time TV writer/producer, who shall remain nameless, and basically, my entire day has been consumed with that. I've been working on the script at night with Travis, which essentially leaves little time for anything else. Since I'm married, well...there you go. No time. Which is why you've seen a massive drop in both posts and 3Questions.
And I'm certainly not going to put aside working on a script for a producer who wants to make it, to work on a short film that's a bit of a passion project. Though that's exactly what I'll be doing next.
I haven't directed a short in four years. In that time, we've gone from the XL2 w/ a Mini-35 adapter being the newest thing to the RED camera, and now the Canon 5D and soon, the ARRI Alexa. With all the cameras and technology available I'm interested in shooting something narrative at the highest quality possible. If I can marry my talent as a visual director with the RED camera in a narrative short (and soon, a feature) I think it will be really well received. And, I have the story. It's something I've been developing for a long time, first as a short, then as a feature, and now we're back to a short. It's based on a short play that was submitted to me in college by a writer. A year ago, intent on producing the feature, I optioned it from him.
But Travis and I always struggled with it, namely because it's two actors in one location and with the setting we had, we were never really sure what they would be talking about. But, after being away from it, and letting my mind wander, I came to a realization and it changed everything. What we loved was the concept, not the setting, and once we realized that, we were free to do anything we wished. And now we've come up with a really great short and maybe after, a feature.
So, once I finish this script, I'm putting all my energy and focus into the script for this short, so I'll have it written and can start prepping it. It's the writing that takes up the time. If I can get a solid 3-4 weeks, to just focus on the short, then, while I'm working on putting it together, Travis and I can start on the next one.
Meanwhile, Travis will be doing some major surgery on our thriller screenplay. We have people wanting to read it but we've discovered some changes that make it AMAZINGLY better and don't want anyone reading any other version.
Needless to say, I've got a full plate, made all the more full by my 11 hour/5 day a week job but as I've mentioned before I'm eager to start directing again, and NOT music videos.
However, on that note, I had a great meeting last night with Mateo to discuss directing a new music video for him. His most recent mixtape has really taken off and he's interested in gaining some more traction on it with a video. And, of course, I'm happy to oblige. We spent an hour discussing some ideas and came up with a very, very cool concept. There's a narrative to it but the whole video is very concept driven, with utilize some cool effects, but remain true to my shooting style. I'm excited about it. It's gonna take a little work to put together but I think at the end of the day, we're going to have a very cool video on our hands. And with Mateo and I's track record, it'll probably get play on mtvU.
We're gonna shoot it on the Canon 7D at the end of April/beginning of May. I'm really gonna push myself on this one, even though there's exactly $0 in the budget. Nonetheless, I think it's a cool idea and I want it to be the best that it can.
Posted by Unknown at 5:00 AM