As part of this post, I've included a two part behind-the-scenes doc on shooting the video. I shot it with the flip cam and put it together quickly, so there's no interviews or anything...just gives you a little insight into what we did. The first part of it is below, followed by the blog. Part 2 is somewhere below.

I wake up. I shower. I get dressed. It's extremely early and an hour later I find myself sitting on Tim's stoop, waiting for the pick up from Todd and Milos.

But perhaps the best thing about being up extremely early at this moment is that it's NOT raining.

I'm leaning against several equipment cases in the back of a CC Rentals truck on my way to set. (How do other director's get to set?) We are on our way to Montgomery PLACE, not STREET, even though we still have a permit for Montgomery St., and Todd and Milos will have to go get the two cops assigned to our shoot from Montgomery St and bring them over to Montgomery Pl and somehow tell them there was a mixup and even though our permit says one thing we're actually suppose to be doing this.

We have a courtesy breakfast scheduled from 6:15 to 6:45, which is when official crew call is. While everyone is eating, I start telling people where we're going to set up the band performance. I meet with Richard, our AD, and Paul, the DP, to go over my shot list and the schedule for the day; Sergei, our Steadicam Operator, starts prepping the camera and his steadi rig; and Tim and his band begin setting up their equipment.

Mornings on set, for me at least, are always tough, especially when you're in a new location (meaning, you're not just coming back to a studio and starting where you left off) because I like to shoot, I don't like to wait around, and it usually just takes a little bit of time to get everyone and everything going.

It took us about an hour and half to get our first shot off, which is an angle on the guitar player for the performance section. For me, this felt like a really long time to get going, but to keep my sanity, I always check in with the AD and see how we're doing, since he's the one keeping the schedule for the day. Richard said this is about what he expected, so we're good.

We decided that we'd knock off the band performance first and the move onto the narrative. And, we had two performance pieces to get through. The first had the band in normal clothes singing the majority of the song. The second had a costume change, where they were now in their own low-rent, homemade superhero costumes, singing the last chorus, with the kids from the narrative dancing to the song with them. 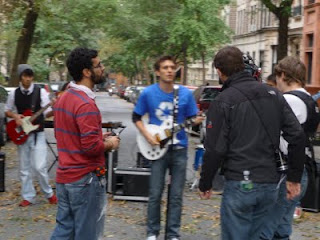 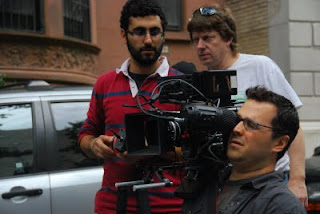 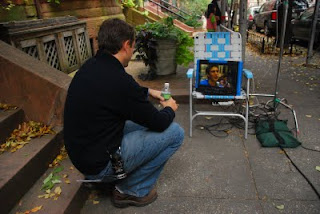 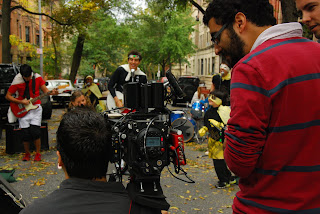 These are some of the photos I've got from the shoot. If you want to see more, you can check them out here.

We finished shooting our performance around 11 AM. Now, when I sat down the day before and worked on my shot list, I took the treatment, and using the scenes I had written up, detailed out a list for each scene, as well as any random shots that I thought up or had written in the treatment.

However, because the rule of shooting is that you try and shoot everything you need in one location before moving on to the next, I couldn't just leave my list like this, because, for instance, the stoop appeared in three different scenes. I didn't want to keep coming back to it.

So, I prepare and organize myself, I took shots and grouped them by location and then scene. So, I had Stoop: Scene 3: Shot. Stoop: Scene 5: Shot. Etc. This way, when we were on the stoop, I was shooting everything I need at that time, and also KNEW what I needed to get. You follow me? Here's a scan of my shot list from the end of the day: 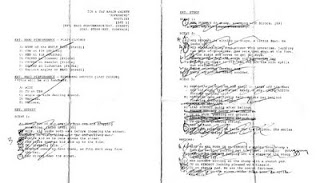 You guys get the idea. So, we just moved around in this fashion. I pretty much shot the majority of everything on the Steadicam, using it as a dolly, a tripod, and so on. Sometimes we broke off and got a little bit of handheld stuff, but we were just able to move much faster on the Steadi.

Our two kids were not only extremely cute but were also real pros. Cameron, our Heroboy, who had just finished a Broadway run of Waiting for Godot with Nathan Lane. What?! Other than for lunch and a bathroom break in the middle of the afternoon we just kept shooting and shooting and shooting.

For one, I had to. We got a little behind and were racing to get everything done before the sun went down. We were also faced with some technical difficulties on set. Rather than use the RED harddrives, we were shooting on cards, which had to then be downloaded. For some reason, our card reader wasn't working correctly, and there was one point where I was told we only had enough storage space for 20 additional minutes of shooting. I was like...uh, what? Then it became about shooting as little as possible...and the problem with that, is that when you're working with kids, it's best to keep the camera running as much as possible, because, they're slightly uncontrollable and they're best when they're not trying to hard.

We literally finished shooting all of our outdoor stuff around the time the sun set. We were out of light. Did I get everything that I wanted? No. Did I get a lot of great stuff? Yes.

However, even though the sun was down, we still had a few more shots to get, as you can see in Part II of the little making of below:

We finally finished and got it all done. Phew.

Everyone did an amazing job on the video and I can't wait to start editing it so I can show you guys the final result. In the meantime, I'll keep you updated on how editing is going.