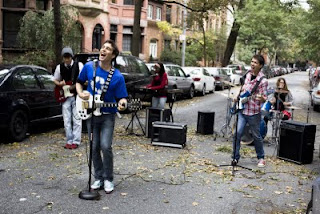 I've only flown a red-eye flight twice in my life and for good reason. I hate them. When I was headed to the airport, I tweeted the question, "Would you rather take a red-eye, not get much sleep, but arrive at your destination in the morning with the whole day ahead of you? Or would you rather sleep in your own bed but wake up at 4 AM to catch a 7 AM flight, and then lose the whole day flying?"

I thought maybe the former was a great idea. But after my experience getting to New York to direct the music video for Tim and the Space Cadets, I'm no so sure anymore.

The only reason I scheduled myself on a red-eye to begin with was because I wanted to maximize my New York prep time as much as possible. Thought I lived there for four years, this particular street in Park Slope, Brooklyn was unfamiliar to me. I wanted to make sure I had time
to see the location, check out and approve costumes, sit down with the producers to go over everything, meet with my DP to discuss looks, and so on.

So, that's how I came to find myself arriving at LAX at 9:00 PM for my 10:45 PM flight. Before we left, my wife suggested that I check the flight status since a lot of flights have been arriving and leaving late due to weather in the East. "Nonsense," I replied. "I'm flying into Detroit. There's nothing going on in Detroit."

(Oh yeah, forgot to mention that my red-eye was NOT a non-stop, but rather had me suffering an hour long layover in Detroit at six in the morning. However, I would be arriving at JFK at 9:15 AM...so, I had the whole day to get done what I needed, as mentioned above.)

Well...there's a lesson in here and that is always listen to your wife because now I was at the airport at 9 PM only to find out that my flight had been delayed until 1:10 AM. Awesome. To make things even better, the delay was longer then my layover in Detroit, which meant I had to get on the phone and change my flight in Detroit. Then, I got to sit around for 4 hrs until we finally boarded the plane and took off.

After an awful flight, I finally arrived in Detroit looking to die and maybe find some coffee. The night before, I had rescheduled my flight to New York for 10 AM, and to get to my gate had to go to, literally, to the other side of the terminal.

There, I was welcomed by the news that my connection was delayed 40 minutes. Curious which airline I flew? Delta. Delta Airlines sucks. (I was also late flying home out of JFK for LAX because the flight attendants were late.) What irks me is that because forming an airline is such an expensive endeavor, there's a limited number of ways to really challenge the existing status quo. Unfortunately, people need to fly and there's only so many airlines, with so many routes, to choose from. So, if an airline has really bad service...odds are it will probably stay in business...which is unfortunate...because, to have three flights out of three be late or delayed...that's just bad service.

Anyway, I finally arrived in New York around noon, where Tim picked me up and drove me into the city. One of the reasons I did the red-eye was because I was still trying to work on my shot list and wanted some time Thursday morning to work on them before a scheduled production meeting at 2 PM.

Now, all I had time for was a quick (and much needed) nap and a cold (yet much needed) shower, after which we headed down to Canal St for the production meeting with Todd and Milos of Hayden 5 Media.

The meeting was quick, everything seemed to be in order and everything was coming together nicely. (I should have Flip Cam'd it but my mind was literally half awake at the time and I didn't have the energy to formulate that thought.) One of the big questions (and fears) facing us was weather. It was suppose to rain Friday, with it fading off on Saturday. I don't think I mentioned this, but initially this was to be a two day shoot. One day for performance, the next for narrative. Due to the size of the budget, we had to cut it down to one day, and this one day happened to be on Saturday.

We agreed to keep watching it. If we HAD to, we could push it to Sunday for a minimal cost, but it was a cost nonetheless and if we could get away with Saturday, we'd go for it. We just didn't know what kind of rain we might be in store for.

After the meeting, I had planned to meet up with the producer of Glory Days for drinks at 6 but they ended up having to push it to breakfast the following day. So, finding myself feeling sick, tired, and with nothing to do, I met up with my brother-in-law and headed an hour upstate to my in-laws house for a delicious home cooked meal and a warm, comfortable bed.

I'm early for my breakfast with the producer of my script, Glory Days, so I'm sitting outside the restaurant next to Liev Schreiber and one of the sons he has with Naomi Watts. I'm hopeful that she might show up but that never comes to fruition at some point he disappears.

Finally, TK, the producer, shows up. Having never met before, but spoken numerous times on the phone and via email, it's a somewhat awkward hello, if only because you're introducing yourselves when you already know each other.

We had to wait a bit for the assistant to show up and he finally does and we all grab a table. It's actually extremely lucky I even get a chance to meet him. His wife is pregnant and due at, literally, anytime, so he's been on call for the last week. Then, not five minutes after we sit down, he gets a call from his wife and steps away. Two minutes later, he comes back all smiles.

And that was it. Ha ha. He said he's name the baby in my honor but it ended up being a girl, so that...just wouldn't work. But congrats to him. I had a great breakfast with the assistant and then I headed back out into the rain, at which point I realized I had forgotten my rain gear in Los Angeles.

If any of you are thinking about shooting a video on Montgomery Place near Prospect Park make sure you go to Montgomery PLACE, not Montgomery STREET. That is, unless you want your location to look like the exterior of several crack dens. This was the mistake I made when I went to scout the location. I had "Montgomery" in my head and assumed it was Street. Thankfully, the real location we had chosen was just across the park, so after a 20 minute backtrack, I finally made it to Montgomery Pl in the neighborhood of Park Slope.

Which is an awesome neighborhood. There's nothing but townhomes here, with huge stoops. There's a great amount of tree cover, as well as a lot of naturally fallen leaves. If it weren't pouring rain, this place would be perfect. 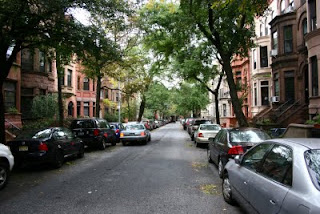 One of the issues we were still facing was finding a stoop, which would be the second biggest location behind the actual street itself. We hadn't managed to secure a stoop but had planned on knocking on some doors the day of the shoot. I saw a couple stoops that I thought would work, which you can see below: 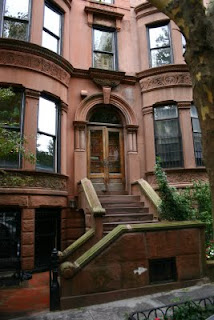 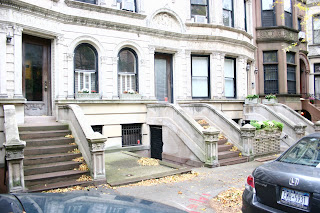 With the location in my head, I could finally sit down and finish my shot list. So, I found a Starbucks a couple blogs away and sat down to pound it out. (Our AD, Richard, had been hounding me for it for a week.)

Work done, I decided to head up to the Time Warner Center, my old stomping ground, for lunch at Whole Foods and a cigar at Davidoff. It was in the middle of just such a cigar when I got a phone call from our producer Milos:

"Hey, question for you," he said.
"Okay."
"Is the location Montgomery Street or Montgomery Place?"
"Montgomery Place."
"It's always been that."
"As far as I know."
"Oh. Um, well, for some reason, things got mixed up and we got the permit for Montgomery Street...you think that could work?"
"If we change the music video to be about the evils of industrialization, grafitti and drugs, then yes it could work. I made the Place/Street mistake this morning when I was scouting the location and it will not work."
"Okay, I gotta figure this out."

Awesome. I guess we'd wait and see. On a happier note, the weather report was now showing AM Clouds/PM Sun for Brooklyn, with the rain from today tapering off around 8 AM. At this point, we decided to push ahead with Saturday. The "rain" that was called for Friday was there but it was off and on and wasn't really that bad. I figured that we'd be fine Saturday since it wouldn't be raining heavier then today.

After drinks with Jeremy Redleaf, dinner (alone) at Thai Basil (a place I probably helped keep in business while I was in college), I headed back to Tim's apartment, where'd I'd be crashing on a air mattress. Finally in bed at 11:30, I had a wonderful 4:00 AM alarm set for the next morning.