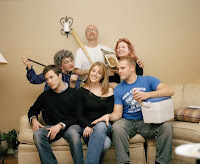 Making the Team was a short film I shot in college based on the one-act play by Tessa Mancini. I had never directed a comedy before (aside from the stuff in high school) and thought because it was a one location comedy it would be a lot of fun to do. It was. But I made the mistake of recording the sound on DAT tapes with a sound guy who dissapeared on me, leaving me with a bill of roughly $400 to transfer the DAT tapes to CD. Needless to say, I didn't have the money, and a rough cut has sat on my computer for the last couple years.

I was recently able to get the DAT tapes transferred for about $100 but it looks too difficult and time consuming to cut this stuff in. So, it still sits. I hope to finish it at some point but I thought I would put it out there, so here's the link to watch the rough cut below:

Making the Team
Posted by Unknown at 6:00 PM